We must take responsibility

There are plenty of commitments I fail to live up to.  It frustrates me.  Despite my failings, voting is something I will always do.

We can engage with people who are running for office, and we must vote. But government isn’t some distant land, out of reach to most people.  Our elected officials are our neighbors.

My 14 year old daughter Jessica and I attended a debate at KI Synogogue between Madeleine Dean and her opponent. Vivienne Spector, who was our next door neighbor when we moved to Jenkintown, represented the League of Women Voters. She welcomed people to the event and laid out some of the rules, like “no applause.”  Herb Spector was there as well.

We sat behind the McCarters.  Steve McCarter is my state representative. I like him, and I think he does does a good job.  Andrew Altman, a sixth grade teacher with whom I worked many years ago at the Clean Air Council, sat across the aisle from us.  Suzanne, my neighbor from across the street sat near the front.

Jessica has taken an interest in our political system as a 9th grader. She’s not afraid to talk about the realities of hypersegregation and reached out to members of the Little Rock Nine last year in school. She’s always been a leader in the region’s World Affairs.  But even when she was in second grade, she asked Congressman Earl Blumenauer why he likes bikes.

This past weekend I was invited to hear Nancy Pelosi speak. I’m constantly struck at how unprepared I am as a conversationalist. When Congressman Dwight Evans said hello to me as I headed for a bottle of water, I said “hi” but felt like I should have introduced myself. I should have said, “Hi, I’m Steve Spindler.”

I learned about some candidates running for seats in the PA State House of Representatives I hadn’t met, including Sara Johnson Rothman from Fort Washington, Josh Camson from Collegeville, and Daryl Boling from Bryn Athn.

I enjoyed talking with Ben Sanchez, whose daughter dances at the same studio as mine. We talked about how exciting it will be to fix the area along Jenkintown Road and Washington Lane, making it more pedestrian friendly and improving the flooding situation. Ben is on the ballot to represent the 153rd District in the Pennsylvania State House of Representatives.

Linda Fields is running for PA State Senate in Western Montgomery County.  It was great to see her.

As Representative Pelosi spoke, her daughter and grandson stood on the steps behind me. Ms. Pelosi talked about what Madeleine would bring to Congress, representing her constitutents on issues such as the environment, immigration, gun safety, womens rights, LGBTQ.

Being present and seeing people in person is a privilege. But, mostly, it involves showing up and helping out. Afterall, elected officials can only serve us if we work with them.

Jessica didn’t come with me to hear Nancy Pelosi. She followed the event on instagram. She can’t vote yet.  But those of us who can, should. A lot is at stake.

Finally, last night I was watching the TV Show Madam Secretary. It was incredible to see three former Secretaries of State on the show, reaching out and conveying a message that our country should be united in our diversity.  CNN even posted a story about this episode.

The motto of the United States is E Pluribus Unum.  Out of Many, One. 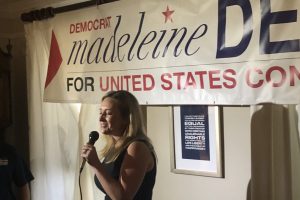 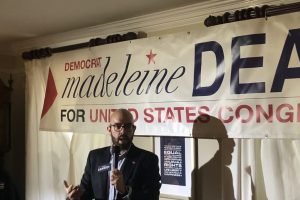 Josh Camson, running for State Legislature in the Collegeville Area 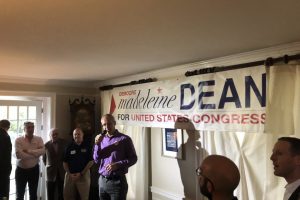 Daryl Boling, running for State Legislature in an area that includes Bryn Athyn. 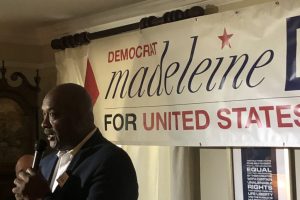 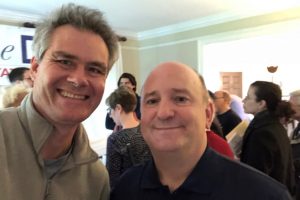 Me with Ben Sanchez 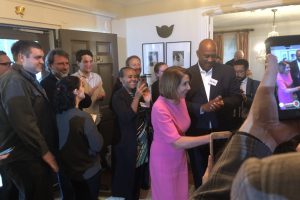 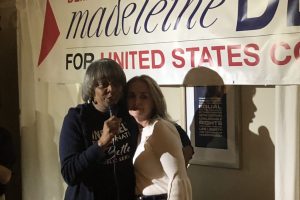 Linda Fields, who is running for the PA State Senate with Mad 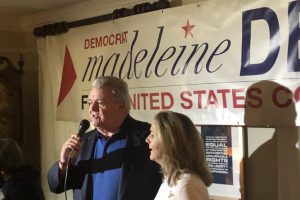 Bob Brady, the Mayor of Capitol Hill, with Mad 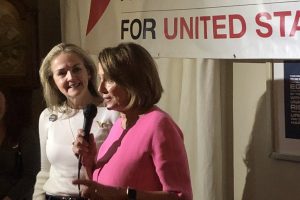 My mushroom retrospective Bread stands on its own