I should be out taking photos in Burlington County, NJ. We finally have some decent sun. And I realize that it’s still March, but I could get a decent map cover photo. 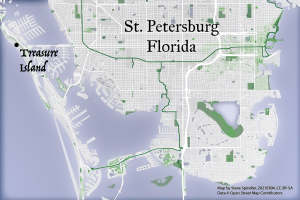 This morning I wanted to capture a different feel. And I worked with a basic Impasto Oil in Affinity Photo.  The scene is Treasure Island, a beach we go to in St. Petersburg, Florida.

We had neighbors up the street who moved to St. Pete and contacted our relative to design their house. I should do a map of where people move to after living in Jenkintown.

Totally unrelated, but maybe not, since working on a graphic gives me time to think…

I was setting up a truck survey in Delaware this morning and editing a school district map boundary in Pennsylvania before working on the beach towel image. Sometimes there are simple solutions that we turn into complex problems because we don’t see the simple solutions.

In the case of the school map boundary, I was dealing with reversed latitude longitude issues.  I flipped these in Excel and placed them into a geojson text file in a text editor that I edited in QGIS.

We are making a new version of our School District Map platform that will let clients edit their own boundaries. It’s progressing well.

I have been reading the following books –  White Trash, John Wesley Powell’s Exploration of the Colorado River and Its Canyons, and Mapping it out, Expository Cartography (by Mark Monmonier).

There’s a strong connection between the Powell book and the Monmonier book. Powell’s book has many woodcut images that explain what you can’t explain in writing.  And Monmonier points out that our education system largely values being able to articulate concepts using words or numbers. But graphical expression is of great value and is often overlooked.

Instead of making his/her own maps and charts, a researcher might say, “Oh, I’ll just get some student to make my maps for me.” I now realize that it takes practice and understanding of visual language to communicate graphically, but this doesn’t mean that people should just outsource this effort.

Time to go out and take photos and ride my bike.

Reflecting on a past hike and making a map. Colombia Map